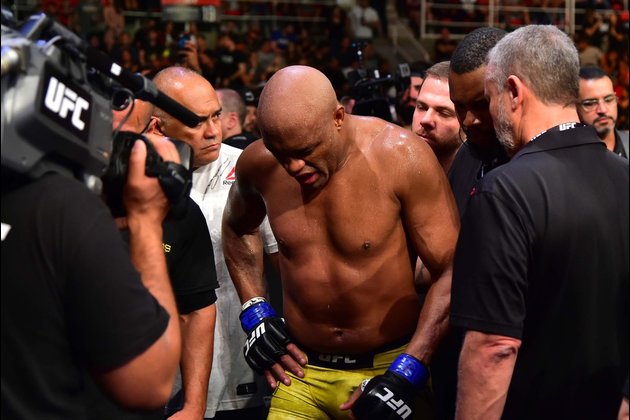 Anderson Silva, a middleweight who dominated Ultimate Fighting Championship like few fighters ever, has been released by the promotion he helped make famous.

UFA president Dana White confirmed to TMZ on Thursday that Silva was released despite having one more fight left on his contract.

Silva, 45, has posted a just a single victory in his last nine fights -- a span of more than seven years. He was soundly beaten by technical knockout by Uriah Hall in the fourth round on Oct. 31 to fall to 34-11 with one no contest in his career across all organizations. He's also tested positive twice for performance-enhancing drugs, but was cleared of the most recent failed test in 2017.

A native of Curitiba, Brazil, Silva, who's known across the world as "Spider," was at his pinnacle from 2006-2013, when he set UFC records for the longest title reign (2,457 days), longest winning streak (16), title fight finishes (9) and knockdowns (18). He ranks second in the promotion in title defenses (10), a record he held until Demetrious Johnson reached 11 in 2017.

White regretted allowing Silva to fight on Halloween and believes the future Hall of Famer should call it a career.

"I made a big mistake," White told reporters after the fight. "I shouldn't have let him fight this fight tonight but out of respect to him, he's a legend of this sport and a legend of this company, I did something that I disagreed with. I knew I was right and tonight proved I was right. Anderson Silva should never fight again."

Silva took to Instagram to say "goodbye" to his life as a professional fighter.

"Good morning, my people. Today is a different day for a simple reason, say goodbye to an entire life dedicated to my sport. Yesterday was so special, I went there to do what I love. I didn't imagine I would be as happy as I am now. Even in defeat, I'm feeling at peace," he wrote. "I want to thank you all from the bottom of my heart, my team, my family, my friends, and everyone who watched the fight, know that it was always a great honor to fight all these years with your support."